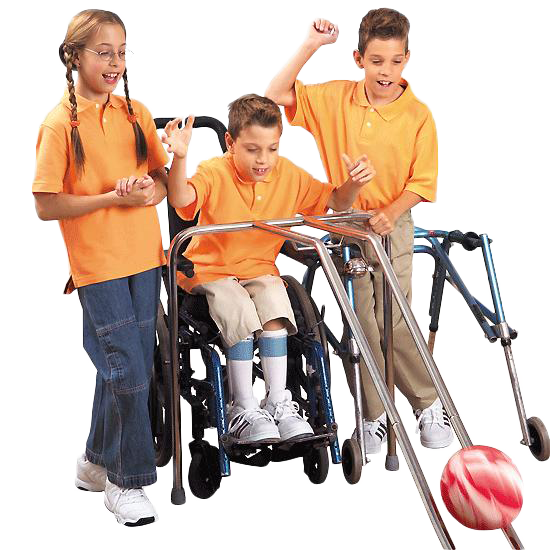 What is Assistive Technology (AT) for Recreation?

Who, When, and Where is AT for Recreation Appropriate?

Why is Recreation AT Important?

Situations for Recreation AT:

Commonly Asked Questions about Recreation AT:

AT Solutions at ABLE Tech

A 4-year-old with Autism Spectrum Disorder (ASD) participates in a Head Start Program, non-verbal, plays alone, little to no interaction with peers, plays with cars, attends to activities for less than one minute

The child’s caregiver mentions he rarely interacts with siblings but occasionally will observe them playing with cars together. At Head Start the child enjoys the daily routine and has no difficulty with daily activity transitions. He interacts seldomly with teachers and never interacts with peers. The occupational therapist (OT) at Head Start would like to begin working on parallel play.

The recommendation would be for the caregiver/teacher/OT to use AT to play alongside the child with preferred toys to increase his attention to the task/individual, tolerance of other individuals, and to develop social awareness at home and Head Start.

The child will parallel play with a sibling/peer for two minutes, three times a day at home or at Head Start.

The student enjoys arts and crafts with peers. The student can grasp utensils that have a large diameter and holds craft supplies with the left hand successfully. She is having motor control difficulty using scissors to make projects and is unable to grasp traditional scissors.

The student will use adaptive scissors to independently cut 50% of craft projects.

The fifth grader never received PE at any grade level because teachers did not know how to include the student, so the student attended orientation and mobility class during PE. The student’s reading class was held during scheduled recess three times a week only allowing for recess two times a week. Reading class was moved to a different time slot allowing recess all week. The student was being excluded from playing soccer, kickball, and football with peers during recess.

The recommendation is to use adaptive sports equipment including modified balls with sound and texture, rule modifications, and adaptive techniques for the visually impaired.

The student will engage in playing soccer, kickball, and football during recess using adaptive sports equipment.

The employee has experienced vision loss over the last ten years. The diagnosis has affected her computer skills. The employee has received Computer AT Training and Low Vision Rehabilitation. She now uses a color contrasting keyboard, modifier keys to complete computer commands, and built-in screen magnification. The accounting office has recently scheduled a staff game night, and she would like to participate in the event.

The recommendation would be to adapt the board games played during the event. One adaptation is dividing sections of the board games with texture contrast. Velcro can be used to hold down game pieces to prevent them being knocking over. Audibly record the game instruction and add color stickers for color contrast. Several adapted games for the visually impaired are available for purchase such as low vision playing cards, large dominos, braille-low vision Monopoly, and Freeze Up.

The employee will use adapted games and AT to participate in staff game night with minimal difficulty.

The employee experiences multiple, painful ear conditions. She avoids using the phone, listening to music, and virtual gaming due to the painful results. The library has a virtual gaming event in one month that the librarian would like to participate in with the library patrons.

The employee will use AT to participate in the virtual gaming event without difficulty.

The camera operator works dayshift due to difficulty with night vision. He struggles with migraines thus taking a daily cyclic antidepressant to reduce sickness. The news camera crew has hired new employees and has planned an escape room work event to get to know one another. The employee would like to participate in the event but finds it very difficult to see in dim lighting to help gather clues.

The recommendation would be to use mid-tech magnification with a light source to help discover the clues and participate in the escape room event.

The employee will use AT to participate in the escape room event finding clues with minimal assistance.

The child is having difficulty grasping and manipulating objects/toys at daycare. He rarely participates in fine motor manipulative tasks such as art, puzzles, and Legos. The daycare would like to help him participate in these fine motor tasks/activities.

The recommendation is to provide large grip manipulatives versus small object manipulatives for the child to be successful in grasping and motor control.

The child will use AT to participate in fine motor activities at daycare 65% of the time tasks are presented.

The teenager loves XBOX gaming and has not been able to participate due to recent amputations. He would like to game with friends online to increase social interaction and is new to navigating fine motor activities with the lower extremities. He will need easy/alternative access for game controller use.

The recommendation would be to use the XBOX adaptive controller with switches. Options include push/touch switches like the Specs, Adjustable Angle, Large Pal Pad, and Jumbo switches as well as lever/wobble switches like the Wobble, Mini Lever, and Treadle switches. These switches are all compatible with the XBOX adaptive controller, provide large target areas, and require minimal pressure to activate. They can be easily activated using feet.

He will use the XBOX adaptive controller with switches to play XBOX games online with friends to increase social interaction.

An 80-year-old, married, “arthritis pain” in both hands, active, difficulty grasping objects, plays cards at the community center, no other health issues

The individual enjoys playing Bridge at the community center with friends. Lately the arthritis pain in both hands has worsened, and she is having difficulty holding cards during the Bridge games, causing her to drop cards and delay the game.

The recommendation is a card-playing holder that sits on the table or a large grip card holder for ease of grasp. The solution needs to also be easy to fill with and remove cards.

The individual will use AT to hold the playing cards and not drop them during Bridge games.